Willoughby for City Council District 5
Hi, my name is Bob Willoughby. I have been fortunate to live the life I have lived, and to be a native of Fort Worth. Before 2013, I was like the 96% of citizens that do not vote in our local elections. Since encountering Code Compliance’s immoral behavior in that year, I have been on a path to discover that Fort Worth is a cesspool of corruption. There are countless things we can do to benefit the city, but first we must restore ethics and morals in our local council, or any action is irrelevant.

​ 2022 BOND MONEY
"City Council has wasted millions of bond money on Rockwood Golf Course"
There a Black Centenary at the north end of Arlington lake with WW2 and children's graves. Someone or Group has put some funds into cleaning and fixing it up not so long ago, and it is a shame that people are taking the fence.
​
A children’s amusement park, with a petting zoo, and 1500 Seat Amphitheater would Protect the centenary and be profitable in more ways than one,

Whatever the case, bond money should be used practically and profitably. Tax dollars were originally meant for sidewalks & streets. Not Bond Money!
Redistricting 4 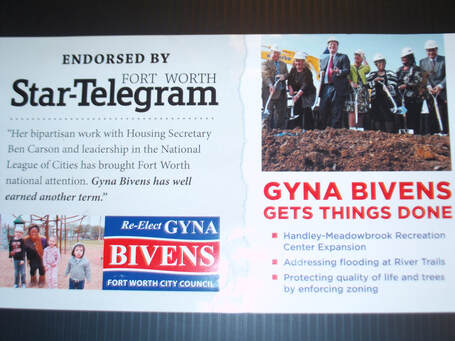 2015 Star-Telegram interviewed all candidates and publicized their interviews with fair reporting.

Star Telegram Mailed Over 40,000 Copies to register voters in District 5.  Is this appropriate?
Yet citizens are denied their 1st Amendment rights, under our Constitution, by the City Council
and Mayor Price.

Candidates should not be endorsed by any newspaper. This is a dangerous practice and one used in countries that don't have a Bill of Rights to protect citizens' freedoms.

And notice the Star-Telegram picture is a picture of Ms. Bivens and a bunch of developers breaking ground. They say a picture tells a thousand and this one sure does.
​
Original song (RUN FOREVER) Do you know about the 2022 Bond?
"Panther Island was never a flood control project so it's absolutely no surprise that federal funding has once again been denied," Putnam said. "It's time to properly investigate the origins of this project, what happened to the approximately $400M of taxpayer money that has already been spent." - 5NBCDFW